How to Fall Asleep at Night

Turn down the brightness. Fiddle around your home screen. Finish reading that article you found off a Facebook link one of your friends shared yesterday about some guy trying his hardest to prevent the existence of inbred bulldogs. Scroll through your saved pictures from that long camping trip through whatever those mountains were you took with your parents two years ago. Check the weather. Check that one fitness app you don’t know why you have on your phone. See how many steps you took yesterday. Check sports, if you’re into that.

4. Lie as still as possible. You’ll remember how someone told you a few days ago that if you’re healthy, the physical act of freezing your body in bed can trick your mind into thinking it should be asleep, which can trick you into actually falling asleep.

You may successfully doze off, for a few short spurts. You might just end up locking eyes with the ceiling the whole time. No matter what happens, by the time this step ends you’ll still be wide awake.

5. Crawl out of bed. Stumble to the ground. Don’t get cut on any splintered floor slats. Curse your roommate for moving in first and taking bottom bunk.

Don’t wake her up.

Keep the lights in the kitchen off. Fumble around in your medicine cabinet until you grab what you think is the melatonin container. Open it. Shake it until a pill falls out. Take it.

6. Go back to your bedroom. You’ll feel oddly awake. Find your phone. Go back to the kitchen. Turn on the flashlight. If all goes as planned, the container will still be on the countertop, and you’ll see that the label says “Maximum Strength: Stay Awake! Caffeine 200 mg. / Alertness Aid.”

7. Go back to bed, quickly. Shut your eyes tight, so the fuzzy void you’re dunking them into will flip your brain off before the caffeine powder floating around in your stomach starts climbing its way up there. This won’t work.

8. Try smoking a cigarette. If you suck it down quickly, all that nicotine all at once could be enough to knock your brain out.

Walk outside. Light up. Your body will be tired enough to not notice the heavy winds around you, so you won’t really be that cold even though it’s only fifteen degrees out. That’s pretty cool.

You’ll see a stray dog across the street. It won’t notice you. You’ll feel bad for it. You’ll barely notice anything else around you. A bigger, angry dog could be charging you from behind, and you’d have no idea until you felt its incisors pierce your skin, or if you’re lucky belt or jacket.

After two minutes, your cigarette will be all ash. Flick the butt away. If you miss the ashtray, pick your butt up off the ground and flick it again. Go back to bed.

9. Repeat Step 5, this time with your phone’s flashlight on. Don’t wake your roommate. Make sure you open the capsule that says “Melatonin” on it. Take at least fifty milligrams.

10. Go back to bed. Upon throwing your head into your pillow, you’ll be greeted by a loud ring and a call from a phone number whose first six digits are the same as yours.

Telemarketers? Whatever. At least I was already awake.

11. Put your phone back down. Mute it. Calculate how long it’ll take you to fall asleep.

Two hundred milligrams of caffeine divided by the fifty milligrams of melatonin in five pills equals… four. So, I’ll fall asleep in four hours? I’ll fall asleep four times, and (hopefully) wake up four times? Does this mean I’ll need forty more milligrams of melatonin to fall asleep? Maybe I flipped the equation around. Fifty divided by two hundred equals one fourth, and a fourth of an hour seems way closer to how long I’ll actually sleep tonight. The most accurate equation’s probably more complex than those, though. Maybe it’s, like, two hundred over fifty in parentheses multiplied by one over five in parentheses. Maybe that’ll calculate the percentage chance it is I’ll get enough sleep tonight to keep me from sleeping through work tomorrow. Now to calculate that all out ‐ wait. What was the equation again? Shit.

It’s time for another cigarette.

12. Walk outside. Light it up. Notice how the chunk of porch you’re standing on caves in, like a trampoline. Wonder why you’ve never noticed that before.

About twenty drags in, look to your right. You’ll see a figure standing across the street. He’ll probably have a hood on. He might be wearing shoes. Once you notice him, you’ll notice how quiet everything is.

Look away from him. There’s better things to look at. Turn your eyes toward those trees across the street that had Christmas lights wrung all over them two months ago. Think about how pretty they were back then.

You live on the corner of a busy avenue that estuaries out into what turns into a highway two blocks down. Since walking outside, you haven’t noticed any traffic. That’s a little strange.

Where are the cars? Why can’t I hear anything? Is everyone in the unofficial insomnia-AM trucker slash strip club patron club really that busy with sleeping or fucking their wives or thinking about fucking them?

You need to go inside. It’s not safe out here. Finish your cigarette as quickly as possible. Remember, every last drop of nicotine is a requirement if you want to beat your hypothalamus asleep. Stare at your almost-butt. Stare past your almost-butt, at those awful Corinthian columns holding that brutalist roof over your head. You wonder why they exist like that, but you’re kind of thankful they do. They’re so nonsensically ugly that no one would ever think to break into your house, even if you ripped off your front door and threw it outside as an invitation. Look to your right. The figure is on your porch, three steps away from you. His face is rotting.

Lie down on your porch in the fetal position. It’ll be all you can think to do. In a few seconds, you’ll hear his breath a few inches above you. Nails will trickle against your shoulder.

13. He’s gone. You’re in bed now. All you’ll see is the ceiling you wake up to every day. You’ll think that was all a dream, but you won’t be entirely sure. Maybe he knocked you out and dragged you back inside for some reason.

14. Climb down to the floor. Turn on the light. Make sure your bedroom door is closed, so your roommate doesn’t wake up. Search through every closet, cabinet, and drawer in there. Make sure that figure you saw isn’t hiding anywhere.

Turn off the light. Walk into the kitchen. Turn on the light. Open the fridge. Take out everything in there. Look around. Open up all your cupboards. Don’t cut any corners. The figure could be anywhere. Try to convince yourself he isn’t real.

Now, you’ll hear some rustling from your living room. Something will appear to rise up on the couch.

“Hey ‒ what ‒ shit ‒ what time is it? Wait ‒ are you kidding me? It’s still fucking dark out and you’re already banging around? What the fuck? This happens every night. Fuck you.”

She might yell at you some more when she wakes up in the morning. She might cook pancakes for breakfast, leave as much of a battery mess as she can on the countertop, and make you clean it all up by reminding you how she was the last one to do the dishes. She might stack some plates on the counter’s edge right by where the French press is, so that when you try making coffee in a few hours with your brain on blurry sleep-deprived autopilot you’ll knock the plates over and they’ll shatter everywhere and you’ll have to spend half a paycheck on a new set of dishes flown in directly from somewhere in Scandinavia, as per her smug request.

You’ve really messed up now. Be smart here. Say something.

Find her some earplugs. Give her some of your melatonin. She’ll stare you down at first, but she’ll still take the pills and put in the earplugs. Within ten minutes, she’ll be back asleep.

16. Go clean your kitchen. Be quiet about it. You’re wide awake now, so you might as well take this as an opportunity to get back in your roommate’s good graces.

Walk over to your kitchen sink. Turn it on. There’s too many dirty dishes. You can’t see the bottom.

Put a big dollop of dish soap on the sponge on top of your dish rack. Take one of the smaller plates on top of the pile, and start washing all the dirt off. It’s good that you’re doing the dishes. Keep doing them.

17. After a while, you’ll notice that you’d usually have run out of hot water by now. Thank your water heater for deciding to work today. Now, you’re confident you’ll clean the dishes so well that someone could make out with them and not get sick, which usually isn’t a good idea when you have barely any hot water and no dishwasher so there’s always some stray raw egg runoff or fast-expiring hot sauce you can’t wash off. You’ll keep doing the dishes and you’ll think of how blessed you are right now and the pile of dishes will get smaller and smaller and you’ll keep doing them and you’ll feel satisfied but then you’ll look to your right and that figure you saw will be right there next to you and his face will still be rotting and you’ll freeze and look away until his rotten fingers slink their way into your line of vision and you’ll be too afraid to call out to your roommate for fear of waking her up again so you’ll turn your head to him in submission but you’ll see that there’s no one there, and only then will you realize that your insomnia and paranoia and greasy long hair with split ends that look like fingers with sharp nails in the dark need to be dealt with before the hallucinations you’ve been having turn into something worse.

18. It’s getting light outside. Check your phone. Check the time. In three hours, you’ll have to clock in. Skip breakfast. It’ll help your calling in sick later feel honest.

19. Finish up with the dishes. By the time you’re done, it’ll be half an hour before the pharmacy a block away from you opens. You’ll need to go there, and get something stronger than melatonin. Take a shower. Wash your hair. Brush your teeth. Get dressed. Bundle up.

Walk outside. Walk to the pharmacy. Make sure you’re not being followed. Buy a jar of Benadryl. Walk home. Take eight at once. Call in sick. Lie in bed. You’ve taken too much.

If you enjoyed this post, consider donating to the creator below. 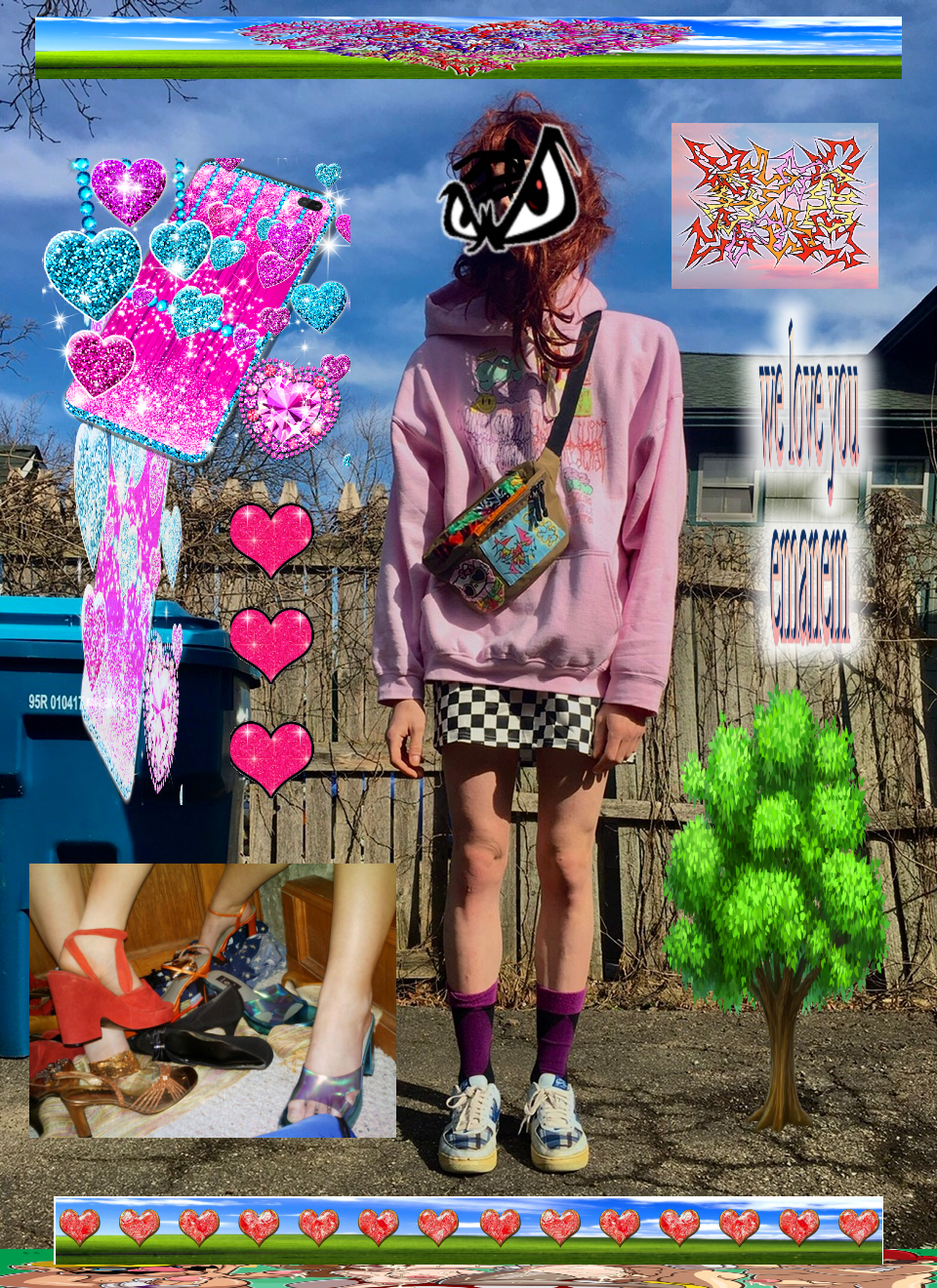 they / she, independent content creator of whatever medium i’m feeling particularly jazzed by when i wake up in the morning. usually floating between chicago and kalamazoo, michigan
Learn more
Donate here
« Dead-End Trips: An Intrapersonal Guide to Interstellar Travel
Virtualgoodsdealer Interview Series: Episode 3, "Music Memes With Bandmemes666" »